I want to start by saying that I am not promising that the information presented here is true.  Some of my conclusions, perhaps all of them, may be false.  That is why this is a hypothesis: it is a proposed explanation for a phenomenon.  What is the phenomenon I am referring to?  The dramatic rise in obesity rates in the last 30 years.

First, let me drop some statistics on you.  As of 2010 68% of Americans are classified as overweight.  Half of those individuals, or 34% of the overall population, are classified as obese (1).  It is true this classification comes from their BMI, which absolutely has its flaws on an individual level since it only looks at height and weight.  However, since we are examining entire populations this data is still pertinent and it will remain so until becoming a meathead is the norm instead of the exception.

The rates of being overweight and being obese have been rising for a century or more, for most of those 100 years the rates rose as a reasonably slow rate.  It was not until 1980 that the rate of obesity started skyrocketing upward and no one knows exactly why. 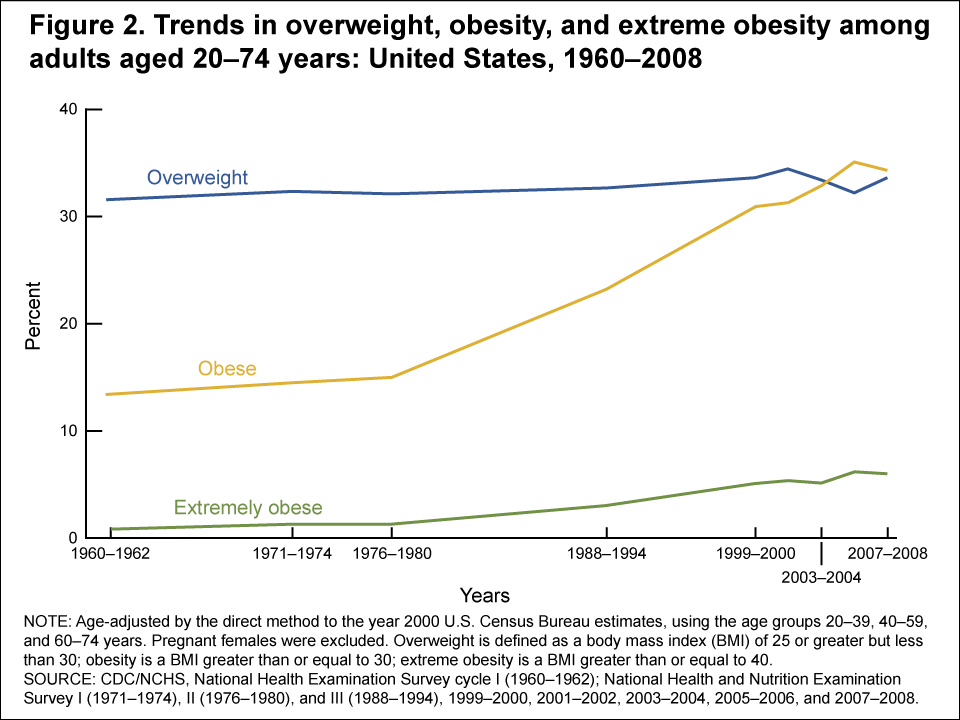 There are all sorts of explanations: too much fast food, better technology leading to a more sedentary lifestyle, too many chemicals in the food, more calories per person, etc.  It is certainly possible that all of those things and more have had an effect, but it seems to me that there is a missing piece of the puzzle.  What is even more odd is that in those 3 decades nutrition information and nutrition awareness has increased greatly.  Almost everyone knows how many calories you consume has an impact on your weight.  Most people realize that a meal consisting of chicken, rice and broccoli is healthier than a meal of a hot dog, oreos, and a coke.  And yet this problem persists, the CDC has now classified obesity as an epidemic (3).  Allow me to present another possible solution.

I believe that the messages that you send to your body can have an impact on how your nutrients are stored in your body.  In other words the thoughts you are generating while eating may be able to effect what your body does with the food you are consuming.  If you are eating fish and thinking about how strong and fit that fish will make you, it is possible your body might do a better job of storing that fish as muscle.  If you are eating oreos and thinking “oh God, this is going to make me fat” I believe it is possible that the body will be more likely to store those oreos as adipose tissue.  I realize that is a somewhat radical proposition – that just your thoughts can change the physiological aspects of your body – and I realize if this is the first time one is pondering that prospect it can sound a bit like pseudo-science.

A logical question to ask is: Is there any precedent for this type of behavior, where the brain can affect what is considered to be standard physiological response?  I believe there is.  The placebo effect is well documented, indeed I wrote an article arguing that it should really be called the Belief Effect.  In this instance the brain alone is bringing about reasonably powerful physiological effects such as lowering allergy symptoms (4), fighting depression (5), and reducing blood pressure (6).

The study of pain is another area where newer models are challenging the older models for supremacy in explaining how the body works.  We used see pain as relatively simple – you have pain sensing nerves that when stimulated send a message to the brain, the brain registers the pain and then you usually move to avoid that pain.  Seems pretty simple, makes some common sense, but when further examined it certainly doesn’t appear to be complete.  If that model is true, how do we explain phantom pain – when an individual loses a limb and yet still feels pain (70% of subjects report feeling this).  How come a significant minority of emergency room patients with very graphic injuries report feeling little to no pain?  Why can pain vary so much from one person to another?  Why do some people seem to have chronic pain and what do we do about it?  I don’t have the answers to all of the questions and I don’t claim to be an expert on this subject.  The point is that researchers are looking more and more at the brain as the cause of the pain – particularly for chronic pain – which is a rather dramatic shift from assuming it is a bad knee or a jacked up lower back that is causing all the pain.  For more information on this topic check out the website www.exercisebiology.com and see the reference list below with some great links found at Bret Contreras’ site (8, 9).

One more example of how thoughts can affect relatively standard physiological reactions is ejaculation.  Most would assume that is a pretty standard physical response – receive a stimulus for long enough and the male ejaculates, emitting sperm with the hope of procreating (at least from an evolutionary point of view).  Yet researchers have found that if the man believed the woman he was with was cheating on him or had multiple sexual partners, he would leave a different kind of sperm than when he believed his partner to be faithful.  Now his semen would contain more fighter sperm to go and attack the sperm of the other males, just because he thought his partner was having some fun behind his back.  His brain (belief) changed his physiological response (10).

There are many other examples once you start to explore this line of thought.  You can raise or decrease your heart rate just by thinking about it, this effect becomes more powerful with training.  Individuals with split personalities often express physical and physiological changes from one personality to the next such as tolerance for smoking, which hand is dominant, allergies, and even being color blind or not (11).  There is some research that even against something as strong as cancer attitude does make a difference (12).

The naysayers often like to take an extreme point of view when discussing a topic like this – for example they will look at cancer and say “okay, just cure cancer with your attitude” or they will look at faith healers and say “this person had a lot of faith but they didn’t have penicillin and look what happened to them.”  My argument is not an all or nothing point of view and I am not advocating the radical approach of only using thought to create physical changes in the body.  My initial question is this: Can your thoughts have any real impact on these processes?  I believe there is enough evidence as presented above to answer yes, at least to those issues.  For example, can an individual change their heart rate?  The answer is yes, individuals can generally raise and lower their heart rate by thinking about it.  The naysayers will say “stop your heart for a day to prove it” and when someone can’t do that they will dismiss their arguments.  I say the fact that I can raise it even by one beat per minute is something, it means I can have an effect.  The next question becomes how much of an effect can we have?  Additional experiments are performed to find those limits.

I believe it is possible your thoughts can have an impact on your body composition, and I don’t see anyone talking about this possibility.  The body will listen to the messages that your brain is sending it and it will try to follow those messages as best it can.  Indeed I believe this helps explain – not in full but at least partially what we are seeing with the data.  This is one reason why we know more about food than we did in the past and yet we have more of a problem with food now than we did in the past.  Most adults and even kids can label food as “good” or “bad” but those very messages may be compounding the issue with those foods.  I am not arguing that it is easy to eat a bunch of oreos, visualize big muscles, and then one will wind up looking a like a bodybuilder.  But I am arguing is there is a chance that when you eat the oreos, if your brain is sending out those messages (either consciously or subconsciously) that this food is “bad” for you and it will make you fat, then you are even more likely to store that food as fat.

Weston Price in his definitive work Nutrition and Physical Degeneration went around and studied various cultures across the world to see what they had in common.  He did this as America was just starting to spread its influence across the entire globe (before 1940).  He was just a dentist and initially he was trying to find out what kind of diet yielded the healthiest teeth but he then started seeing a bigger connection between diet and overall health.  The cultures he assessed as being the healthiest did have some similarities with their diet (such as eating the whole fat version of the food) but it isn’t as if they were all eating the same thing.  Interesting, he did note that all of those ‘ideal’ cultures didn’t seem very obsessed with food, which I can’t say is the case for most of America today.  With the Super Bowl approaching have some awareness about how much of the focus of attention is on food – what we are going to eat, when are going to eat, let’s get together and eat, etc.  I have even noticed as adults, sometimes including myself, when talking to our kids one of the first things we say is “we’ll go to the birthday party and they will have pizza and cake, it will be fun”.  Food is something we often look forward to, yet it is very rarely something we remember.  I would advocate that we reduce the focus on the food – we are not going to starve in present day American society – and thus the focus should be on whom we are going to see, the relationships we are going to build, and what we are going to do.

In summary I would advocate the following:

If you adopt this philosophy and I am wrong, I don’t believe any significant harm will come from it as long as you use results to guide your behavior and actions.  But what if you can just move the dial a little bit, what if thinking a certain way about a food changes how 5-10% of the nutrients are stored?  For all of your foods, day after day, month after month, that adds up.  Imagine if that had an equal impact on your body composition – that you could move your bodyfat up or down by 5% just by being mindful of your thoughts as you ate.  That would be an interesting hypothesis, now wouldn’t it?

2 thoughts on “What if this was True: The Body Composition Hypothesis”