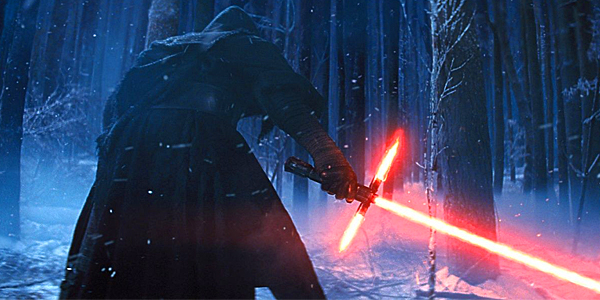 First off, this blog will have nothing to do with lifting weights, instead we will talk about another topic near and dear to my heart – Star Wars.  I know you might not expect to find a Star Wars article on a powerlifting website but the movie just came out and hey – it is my blog – I get to write about whatever I want.

Secondly, I don’t plan on giving away significant spoilers in this review.  This will be a general review of my impression of the movie and how it compares to its previous 6 counterparts.

Third, I should mention that I have only seen the movie once, which is one reason why I am entitling this my ‘first’ review.  I do believe that a true testament to how good a movie is its rewatchability.  I am a pretty big Star Wars fan – not a trivia guru like some but I have seen all of the previous movies at least 10 times each and I do like them.  I was exposed to Episodes IV, V, and VI initially but I was a fan of I, II, and III and I thought those movies did a nice job of describing Vader’s fall without making the audience hate him (which is actually a tough job to do).  I liked them more as I watched them more, I know some hardcore Original Trilogy junkies don’t like the Prequels but that is not me.

4 hours ago I was in the theater, waiting with anticipation for lights to dim.  Now that it is over – how did this movie stack up?  In short I thought it was pretty sweet.  I certainly didn’t walk out of the movie disappointed and I am cautiously optimistic that the more I see it the more I will like it.  The movie was fast paced but still had a serious plot.  For information sake I saw the movie with my 6, 7, and 9 year old sons (all Star Wars fans already) along with my wife (a kinda/sort fan) and everybody liked it (I think my wife may have liked this one the most of all of them).  One knock on JJ Abrams when he did some of the Star Trek movies is that there was not enough deep plot that Star Trek was known for.  Star Wars doesn’t fall along the exact same lines but I thought there were enough “lessons” imbedded in the story that it continued the Star Wars theme nicely.

The CGI was really good, I never had a moment where I thought it sucked (for example as in Twilight with some terrible looking wolves).  It was also more real life and gritty.  The CGI is obviously better in the Prequels than the Originals but it kind of had a fantastical feel to me.  This CGI was more there and in your face.  You got a sense of that from the trailers with the Tie Fighters flying in low on the horizon but it continued.  I think that was a strength although we’ll see how it stands the test of time.  They also followed through on the tradition of some really cool and spectacular scenery that Star Wars is known for, often when it is not even integral to the plot.  They didn’t do that quite as much in this one as the Prequels but you could see the effort was made.

I thought the new actors were good.  The 2 main characters, Fin and Ray, had good chemistry and were both enjoyable.  Ray stood out more to me, she had a Natalie Portman-esque like presence although probably not as strong (I am huge Natalie Portman fan).  Fin was likeable and a bit more real life and relatable.  It was great to see the old characters again reprising their roles and the audience cheered when they were introduced on the screen.  The bad guy was played reasonably well, although I certainly hope they give more clarification in the next 2 movies why he went to the dark side.

There is a fair amount of humor in the dialogue, at first impression more than the first 6 movies.  It went over well, again on a first impression, but humor is definitely tricky and sometimes it falls flat when you watch it over and over again.  I felt like the Star Wars humor in the original (scruffy looking nerf herder type stuff) actually doesn’t catch you as that funny when you first hear it and then it gets funnier over time, I am not sure the humor in this movie will do the same and it could end up being a negative.  Only time will tell on that one.

Even though it is sci-fi, I am a stickler for plot holes.  You can have light sabers and hyperdrives but there are general rules and laws that things have to follow.  I didn’t think any of the first 6 movies had any big plot holes and for the most part I didn’t see any significant plot holes in this one either.  I say for the most part because the last 10 minutes introduced 2 or 3 things that seemed more iffy to me and I was left wondering if they were going to be able to make sense of that in the next two.  My gut tells me they will on one thing but the other ones maybe not so much and if that is the case that would be a disappointment.

I know I said I would not give any spoilers, I don’t really see these next 3 things as spoilers of much significance but if you don’t want to know anything about the new movie then don’t read this part.

One of the potential plot holes I mentioned above is a result of R2D2 being “sad”.  He is sad that Luke isn’t around and goes into shut down mode.  I thought the previous generation of Star Wars movies did a great job of ascribing droids with emotion like features to help us relate to them but without giving them true emotions (when they have real emotions wiping their memories and seeing them blown up and such is much tougher to do).  But in this one they just said screw it and with R2 at least just gave him emotions and to me that didn’t make much sense.  I didn’t think what happened with him at the end made much sense, at least with the info given, they might explain it more later.

Secondly the movie is a bit more daring, in a good way.  There was a scene building, an important scene, and I saw what was about to happen and I was wondering if they would have the guts to do it or not, and they did it.  I think ultimately that will be a strength although I am curious as to how the repercussions of that will play out in the next 2 movies.

Third the movie really closely parallels Episode IV in terms of how the plot is laid out.  In a way I liked the nod of respect toward that movie and the attempt to further connect this series with the Original Trilogy.  In another way I didn’t like how that made this movie more predictable and ultimately a little less exciting since you had a bit of “I’ve seen this play out before.”  I also fear that may be really apparent when we watch it again after we know how things are going to end.  This is probably the biggest negative of the movie to me at this point in time.

Ultimately I thought it was a pretty damn good movie.  I am psyched to both see it again and see the story continued.  I will reserve any more flowing praise or harsher condemnations until I do see it several more times and ultimately until I see the whole trilogy and how they string the story together.  The thing the Prequals had going for it was that fans seem to fall in love with Vader after the Original Trilogy and as such they were very curious to see what would (or this case did) happen to him.  The negative of this one is we don’t already love the main characters before we even start, the movie will have to create our love for them anew.  We love the secondary characters – yes – but not the main ones, and that is a tougher battle to face.  I would not say I love them after this first one (although one of my sons might) but I could see growing attached to them.

I am excited about the movie and it’s potential.  I am a bit nervous about how the next 2 will play out but I would be reasonably optimistic at this moment in time.  If you are a Star Wars fan I would certainly go out and see the movie.  If you are a new fan I think seeing the other movies first would be ideal.  I am frequently asked how one should see the movies.  I believe that seeing them in their original order, with Episode IV, V, and VI seen first, is ideal (you can be a rebel and watch IV and V, then I, II, III, and then go and watch VI if you want, that is what my brother did with his kids who have turned out to be major Star Wars freaks).   Plus it is the most popular series in the world so if you want to be “hip” around the water fountain (or squat rack in most of our cases) you need to see it, and I would suggest that happens sooner rather than later.