There is an inverse relationship between skill and arousal level.  Skill is the level of difficulty, precision, and motor control that a movement requires.  Arousal (no, I am not talking about that type of arousal) refers to the psychic energy one displays – how amped up you are to do something.  Too much arousal screws up very high skill things, this is why some no-name leads the first 3 days of a golf tournament and then crumbles under the pressure on that last day when everyone is watching.  This is why a kicker might make 30 out of 30 field goals in practice and then they miss the same kick when the game is on the line.

Powerlifting isn’t a super high skill sport; it isn’t like golf or figure skating or gymnastics.  You want a certain level of arousal when competing.  In addition each lift is pretty short.  High levels of arousal are reasonably draining (physically and emotionally) but luckily for us the respective lifts are short.

The squat requires the highest skill of the competitive powerlifts; this is the lift that nerves tend to negatively affect the most.  Most lifters aren’t under psyched up for a squat, they are too excited and then they forget the commands, make a simple technical mistake, forget an important cue, or they fail to hit depth.  During the squat you certainly want to be focused but you don’t want to be crazy, and certainly not for your first attempt.  Just be a focused robot, be a machine.  You are strong, you are consistent, you know how to do the task at hand, and robots follow directions.  When the judge says “Squat” you squat, when the judge says “Rack” you rack, other than that you don’t move.  For your subsequent attempts you can get more fired up but remember a powerlifting competition is a long day, don’t blow your wad on the squat and have nothing left for the other 2 lifts.  This is particularly true if you have been separating the lifts in training (having a separate squat day, bench day, and deadlift day), in this instance you may not be ready to handle the emotional drain of performing maxes on all 3 lifts on the same day.  Definitely get in the zone, but you are not a crazy animal at this point in the game.

The bench requires similar focus as to the squat.  The good news is by this point in time the lifter is already in the meet and their opener shouldn’t make them too nervous (if it does they either need to lower it or simply have more confidence in their abilities).  If you are doing a bench only or push/pull then you’ll be a bit more nervous as this becomes the first lift of the day.  The bench tends to be the most “different” in a meet because you are benching on a different bench press (different pad, maybe different rack height, different bar, lift off may be different, having to wait for a pause command, etc) and that can throw people off.  Again too much arousal makes it actually hard to focus, whereas with too little arousal you feel like you can’t get fired up.  I think the analogy of a controlled robot applies well here also.  Wait to “Start”, then “Press” when told to do so, and then “Rack” when the lift is complete.

The deadlift is the lowest skilled competitive lift (the curl is similar if you perform it).  This means we want an extra high level of arousal.  If you want a slap on the back or head butt or whatever, this is the time to do it.  In addition it is at the end of the day and now the lifter is battling fatigue – fatigue of both the classic physical system (muscles, tendons, ligaments, etc) and the nervous system.  It is on the deadlift, particularly that 2nd and 3rd attempt, where some lifters are not fired up enough.  Now is the time to let loose the animal – ‘to get rid of the stuff in the basement’ as Rocky Balboa would say.  You still must have enough focus to hit your marks and lift with good technique, but now is the time to release that adrenaline.  This is particularly true if you use the Conventional Deadlift style, the Sumo Deadlift requires a higher level of skill and thus you may want to reign in your rage a bit to ensure good form.

Pete Rubish, master of unleashing the animal on the deadlift

Appropriate arousal level will vary notably from lifter to lifter.  A little bit of introspection can go a long way in this regard.  After the meet simply evaluate your performance and note your arousal level.  Was is too high, just right, or too low?  If it wasn’t just right, was it way too high (or low) or just a little bit too high (or low)?  Note this for each lift.  Then try to learn from this and refine it with each competition.  This is a dynamic process so getting it right for one meet doesn’t mean you have mastered the process for the rest of your life.

One meet doesn’t mean you have mastered the process for the rest of your life.

Understanding your own optimal arousal level for each lift will help maximize your performance come competition day.  Try to emulate those lifters that appear to be having fun, lifting serious weights, and end up standing on the podium.  Like most things in life, just try to be better at this process next time then you were this time, and good things will happen.

Exciting News – the online store is scheduled to go live on Memorial Day.  This means you can buy the book (and the eBook) from that day on! 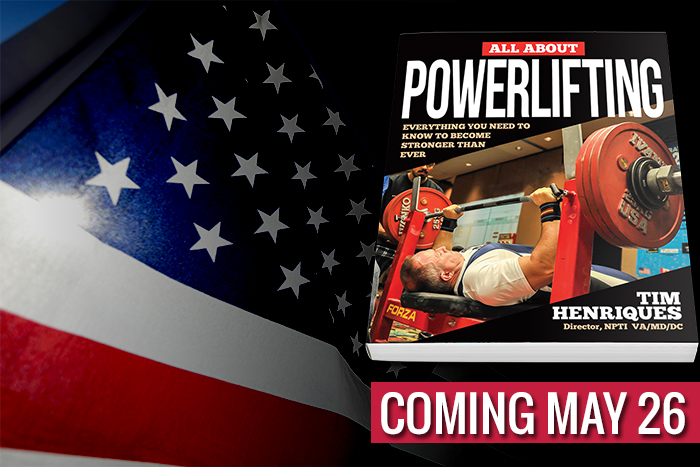 3 thoughts on “Skill and Arousal”