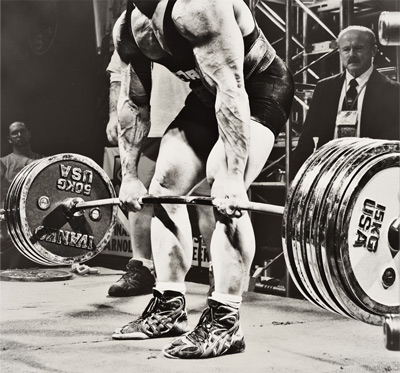 When you look for an expert, what do you look for?  Of course they have “know their stuff” but it goes deeper than that, right?  You want someone who has “been there, done that” and also someone that explain exactly why and how it works at the same time.  When it comes to building strength and fitness we don’t just want a book worm that might be able to recite a chapter word for word but has never applied that knowledge.  We also don’t just want someone that grew up only on Flex magazines and has never bothered to properly educate themselves in an academic setting.  When we are looking for an expert in the field, we want it all.  In short, I think we look for 3 key things:

The 10,000 Hours – has this person put in their time in the trenches and have they actually worked on what they are talking about?  One of my favorites quotes is: “Don’t spend much time listening to someone talk about something they haven’t done.”  I really don’t care about your thoughts on climbing a mountain if you have never done it.  I don’t care much about what you think about squats if you’ve never had double your bodyweight on your back and sunk it to the proper depth.  Nobody said becoming an expert was easy, but if you want to be viewed as one you have put your time in, there is no way around it.

Practical Proficiency – all aspects of fitness are specific and measurable – you can easily see if you are good or not.  If you spend a lot of time working on an ability, you should get notably better in it.  Practice by itself doesn’t create mastery – you must practice with the intent of continual improvement.  If you are an expert, it doesn’t mean you must be the best in the world, but you should be significantly better than the average person.

Academic Knowledge – The amount of knowledge at our fingertips is huge, but you need a strong filter to be able to weed through and sift the useful stuff from the not so useful stuff.  This filter can and often needs to be built by academic learning – going to school, listening to an instructor, taking tests, and learning the old fashioned way.  Without this strong foundation one may find themselves jumping from fad to fad in hopes of discovering the latest and greatest thing in their world.

If we were looking for those that were experts in building strength and improving fitness, who might we find:

Dan John – This man is close to a living legend.  An accomplished thrower with literally decades of experience.  He is known for distilling complex topics into simple, easy to understand parts.  He is also a prolific author and his book Never Let Go is one of my personal favorites.

Josh Bryant – He is the Bench King.  The youngest man to ever bench 600 lbs raw.  He is a beast in the gym and he has an awesome philosophy about lifting and life.  I really appreciate the way he writes, he has also put out numerous articles and books on strength training.  I regularly read his book Jail House Strong – the Successful Mindset Manual when I want to get focused on a big task ahead.

Jordan Syatt – How does a 4 x bodyweight deadlift sound?  It sounds pretty damn good to me.  The deadlift was my best lift and I was never able to hit that magic number.  Jordan has, end of story.

Bud Jeffries – He is a travelling strongman.  Literally, like they used to do centuries ago.  He still does this, full time, almost every week of the year.  He has spoken to over 300,000 kids to deliver an anti-bullying message, using strongman exercises to add weight to his words.  If you want new ideas on unconventional training, listen to what he has to say.

Dean Somerset – A kinesiologist who specializes in core development.  Dean regularly talks and presents on the topics of mobility and strength and is described by many fitness experts as their “go-to guy” to build the core after injury.

Matt “Kroc” – Kroc has done what many people wish they could do but few can – he has competed at a very high level in both powerlifting and bodybuilding.  He isn’t “all show and no go” like some bodybuilders and he isn’t “all go and no show” like some SHW powerlifters.  He set a world record total for 220 lb equipped class of 2551.  I thought this pic of him deadlifting was so inspiring I put in the book.  You can bet he knows a thing or two on blasting the upper body.

Tony Gentilcore – A self-proclaimed nerd turned athlete, Tony is the co-founder of Cressey Performance Systems.  He regularly works with professional athletes, tuning them up and keeping them healthy while simultaneously building their performance to an elite level.  Wise as Yoda, patient as Obi-Won, and as strong as Anakin – he is a good guy to learn from.

That looks like a pretty good list of experts to me.  7 studs you can learn from – and to round it up to an even 8 let’s throw in the dude who wrote All About Powerlifting and NPTI’s Fundamentals of Fitness and Personal Training, the textbook for personal trainers.

How cool would it be to be able to learn from these guys?  To sit down and listen to what they have to say about their various specialties.  And not just a 5 minute filler conversation – what if you had access to hours of their thoughts?

Well now you can.  About a year ago my friend Eirik Sandvik and his crew flew to the states to meet with these experts.  He literally toured the nation over the course of several weeks, spending huge amounts of time (and money) to meet up with these weight wizards and pick their brain.  And it isn’t all just talk, he films them in the gym and several of them write up sample programs for the lifter to use.

This 8 part series becomes available at the start of the New Year, but it is available for pre-purchase, at a significant discount, now.  Again you are getting 8 experts – with hours and hours of content from each one, plus 4 kick ass workout programs (a squat program by me, a bench press program by Josh Bryant, a deadlift program from Jordan Syatt, and an upper body specialization program from Matt Kroc).

I am very excited about what this series has to offer and I was honored to be included in the list.  To pick up your copy now, or just to get more information about it including an 8 part free video series from each one of us, go HERE.

3 thoughts on “Who are the experts”