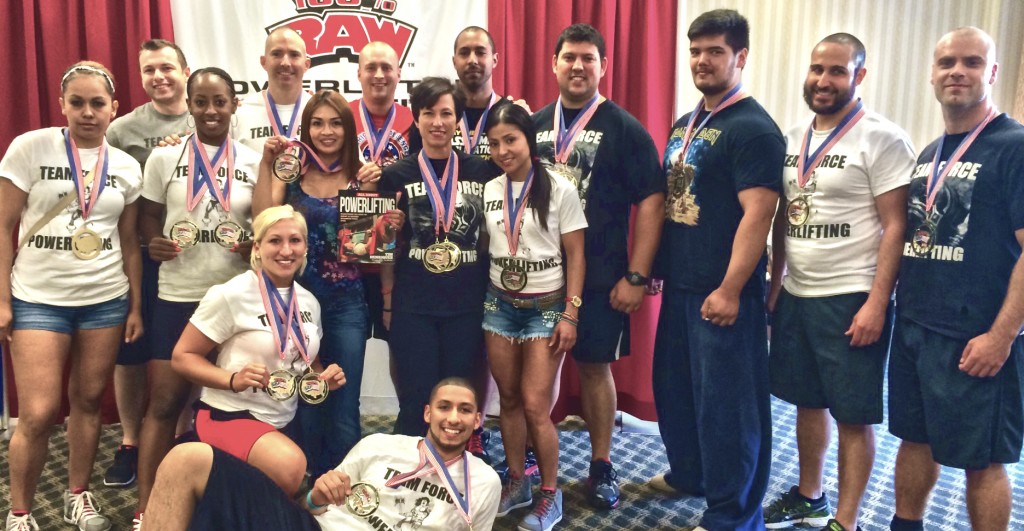 I always think it is a good idea to sit down after a competition and think about what went right and what didn’t, both in the training cycle and on the day of the meet.  I am lucky in that I get to work with my team, so I have even more data to plug back into the system.  I also believe that you the reader can learn something from this process.  I think this is a good opportunity to highlight the idea that powerlifting is inclusive, not exclusive.  Certainly the top level or elite lifters are going to get the extra press, but powerlifting is for everyone who wants to push themselves, for anyone who wants to mold a better version of themselves.  To provide some unanimity I am going to number the lifters instead of provide them by name.  In this competition I coached 15 lifters plus myself.

Lifter 1 – 97 lb female.  First meet.  She followed a 7 week cycle that I programmed for her and I oversaw her training, it was essentially a mix of the 40 squats in 8 weeks program and the Super Bench program.  She went 9 for 9 and hit a 209 squat (15 lb PR), 110 bench (5 lb PR), and a 225 lb deadlift (10 lb PR).  It was a successful program and good number selection for her.  She ended up being the 4th best lifter in entire competition and she hit an “Elite” total in her very first meet and according to PLwatch.com that ties her for the 2nd best squat and 3rd best bench in the country at this point in the year for those in the 97 lb weight class.

Lifter 2 – 105 lb female.  First meet.  Initially she signed up for the meet, then pulled out, then 2 weeks prior jumped back in.  She trained herself.  She sent me her numbers (best set of 5 or 8) and then I set up her attempts.  We decided to just open up with 5 lbs heavier than her best set that she gave me and then go from there.  This was a coaching lesson for me.  In the future I am only going to use numbers I have seen in person or on film as this lifter’s numbers were high eg she might have squatted a certain weight for a certain number of reps but perhaps not to competition standards.  During warm-ups I lowered her squat opener to 10 lbs less than her best set of 5 as her warm-ups didn’t look strong.  Don’t hesitate to do this for new lifters.  She got that lift and missed her original opener 2 times (she would have bombed if she didn’t lower it).  On bench she went 2 out of 3.  On deads she missed her opener two times and then got her third.  I give her a lot of credit for getting that last deadlift as the first 2 didn’t come off the floor and honestly I thought she would bomb.  I was mad at myself for not confirming her lifts prior.  One of my fundamentals rules as a coach is that lifters never bomb out.  It turns out she was trying to wear a belt on the first two attempts which she has never done before.  Another lesson for all lifters – you don’t try something new on meet day, that is what practice is for.  She was so small (remember, she is only a 105 lb female) that a big powerlifting belt was messing her up form.  Again to make her last pull after not budging the first 2, that is tough mentally to do.  She ended up going up 4 for 9 with a 155 squat, 100 bench, and a 190 deadlift and I think with some more dedicated training she has a lot left in the tank.

Lifter 3 – 132 lb female, master lifter – several comps under her belt.  She trained herself on a program I created for her.  She made her weight cut (not as easy when you get older).  She went 8 for 10 and got a 250 squat with a near miss at 259 (a PR), 142 bench with a miss on a 4th attempt age group federation record at 148, and a 275 deadlift which broke a plateau she had been stuck on with deads for a while.  Solid meet, good performance all around.

Lifter 4 – 148 lb female, first meet.  She followed a program I created for her but she worked out on her own and even had to deal with moving out of the state during the cycle.  She went 7 for 9.  On squats she was 1 for 3, smashed her opener, got her second attempt but the bar slipped off her back and fell backwards.  We went up 5 lbs after that but she missed it.  It is a good idea to practice squats in your singlet for several weeks prior to the meet, and when you get fired up if the bar kind of jumps off of your back you have to use your lats to control it to keep it tight.  She didn’t let that mess her up and she made all of her benches and deadlifts.  She finished with a 230 squat, 142 bench and a big 303 deadlift (30 lb PR).  Great job for a first meet.

Lifter 6 – 148 lb female, junior, first meet.  Bench and strict curl only.  Did her own training, I helped her with her attempt selection.  She went 6 for 6 and benched 148 and curled an impressive 82 lbs which tied for the heaviest curl of the meet by a female. 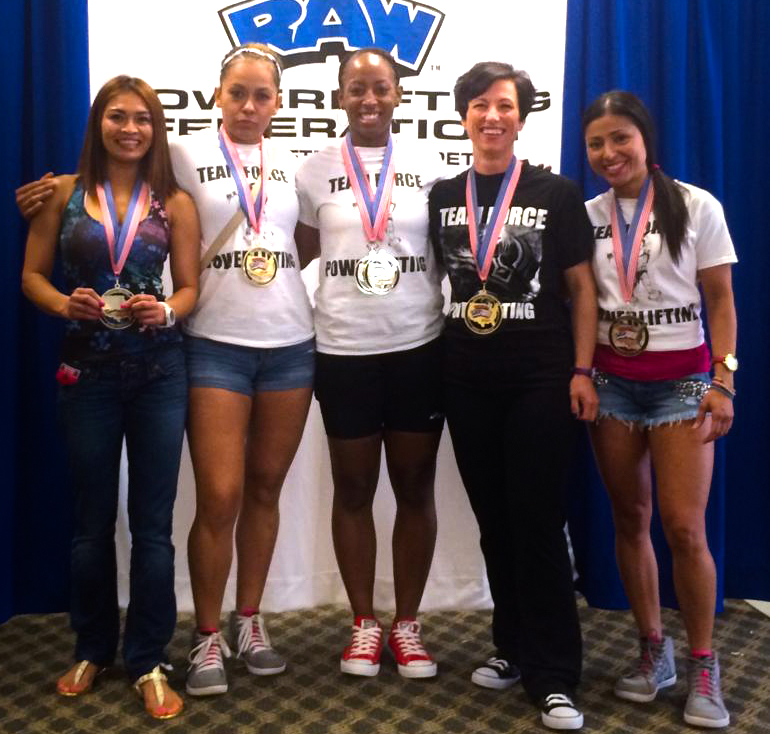 The Ladies of Team Force

Lifter 7 – 181 lb male, third meet.  He is one of my training partners, about 2 years ago he had a 225 squat, 175 bench and a 245 deadlift.  He went 7 for 9, squatted 370 (17 lb PR) and barely missed 391.  He had it but got over psyched and the bar rolled over his head, the first time he had expressed that technique flaw.  He told me later he had watched his last heavy gym set over and over, which was a grinder, and he got nervous about it.  Take home point – there is a big difference between a meet and a gym; a competition max and a training max.  It is okay if a training max feels heavy or slow, come competition time with a good prep and a good level of arousal you can still smash that weight.  He benched 230 (5 lb PR) and missed 242.  He deadlifted 420 (20 lb PR).  All in all in a solid performance, had he made that squat it would have been awesome but that is what the next meet is for.

Lifter 8 – 198 lb male, multiple comps under his belt.  He is one of my training partners.  He had tweaked his back a while ago so he wanted to go with a high bar squat.  He wanted to be a bit conservative on his attempts because f that.  He went for 6 for 8 with a 375 squat (5 lb high bar PR), 250 bench (missing 260).  He had been stuck at a 450 deadlift for several years, he wanted to do one “warm-up set” as his opener with 385 and then just blast his goal weight of 468 on his 2nd attempt (18 lb PR).  If he got it we would skip the third attempt.  He got in the zone, got fired up and ripped the weight off the floor.  It was a great attempt and hopefully he is now on his way to 500.  Take home message – it is okay to skip a lift if you are happy with what you did, the positive vibes of making that lift often outweigh the potential negative of trying 10 lbs more and missing it.

Lifter 10 – 198 lb male, multiple comps under his belt.  Unfortunately this lifter got hurt during the warm-ups and had to pull out, he pulled his hip flexor or sartorius while warming up with squats.  He was well poised to squat over 500 for the first time in this meet having smashed 505 in the gym but no such luck.  Hindsight is 20/20 but in hindsight we went too heavy in precomp week.  This lifter likes to keep the feel of heavy weight but as one gets stronger you have to taper more and have confidence in your lift.  Our goal was that 500+ lb squat so he was ready for that without squatting somewhat heavy in the tapering phase, as that tweaked his leg a bit and then it wasn’t healed come meet time.  He could have gotten upset, left, freaked out but he chose to focus on his teammates and help them instead and he deserves credit for that action.  And sometimes injuries just happen.  To check out the injury rates of various sports that involve heavy gym time, take a look at this cool article posted by Bret Contreras.

Lifter 11 – This is me.  I was 198 lb (8 lb cut the week of), just doing bench and curls.  I had shoulder surgery last year (torn labrum) so it has only been in the last 3 months or so that I have gone kind of heavy on bench.  My previous meet best bench at 198 was 347 (I did my best benches at 220), I thought I had a good shot at 352 in this meet.  Warm-ups didn’t feel great and I missed the 352.  I didn’t make a technical mistake but just didn’t have it that day, not sure if it was the cut, the coaching, or me just being a pussy.  I also curled but my elbow had been funky and I hadn’t gone heavy for the last 4 weeks because of it.  It was really an experiment in how much curl strength does one lose without going heavy.  I curled 154 and then missed 165 narrowly (butt came off the pad a bit).  When you go conservative and then miss your last attempt, that pretty much sucks.  I would give myself a C+ in terms of performance, I was 4 for 6.  In the future I think I will either focus on coaching or lifting but not try to combine both at the same time.  I didn’t aggravate anything and my kids got to see the meet (although I hate failing in front of them) so that was a plus.

Lifter 13 – 220 lb male, this was his first full meet, he had done some push-pull comps.  He followed a training program I created for him and I helped him with his numbers.  Several years ago he had major back surgery so we have been progressing slowly.  He had some personal shit happen right before the meet so I give him serious credit for A) just competing and B) performing well.  He did all the lifts including curls and went 10 for 12.  He squatted 460, benched 391 with a miss at 402, deadlifted 495, and curled 142 with a miss at 148.  He had to cut about 8 lbs the week of to make weight.  Solid performance and solid training program.

Lifter 15 – 242 lb male, several comps under his belt.  He is one of my training partners.  He had tweaked his back so he just did bench and curls.  He usually competes at 275 but wanted to come down and do 242.  He did a 13 lb weight cut that week, his fist one, and made it so that was good.  He didn’t have a great meet, just got his opener on bench.  He has a big sticking point about 3” off his chest where the bar just stops, we need to work on that.  He did set an 11 lb PR at this bodyweight for curls.

Something interesting about the American Open with 100% RAW is that they will combine the results of this competition with about 8 other meets held across the country, so someone might win in VA but then lose to a lifter from Texas.  It is kind of a cool way to increase competition without having to fly to a specific meet as the last American Open had 650 total lifters.  I am excited to announce that Team Force was once again the Open Mixed Champions of the American open (we won this in 2011 and 2013 as well).

If you just want the cliff notes, here are some quick take home points I took away from this meet.

One thought on “Team Force VS. The 2014 American Open”