Every now and then it is a good idea for sports to re-examine their rules.  The NFL is doing this right now with the extra point.  NASCAR does it continually with their engine and tire packages.  Most powerlifting feds will have yearly meetings where they discuss potential changes like what gear to accept or not, if they should change the weight classes (they shouldn’t), and other rules that help them govern the sport.

If I may be so bold, I would suggest that the governing bodies clarify a rule that, in my opinion, a few lifters are taking advantage in a way that doesn’t benefit the sport.  Currently most feds state that the upper back and butt must be in contact with the pad when performing a bench press.  The upper back is obvious, but the rule about the butt leads to confusion.  The question then becomes ‘how much of the butt must be in contact with the pad’?  Is it a legal lift if just a tiny portion of the butt touches the bench, or should most of it remain in contact? 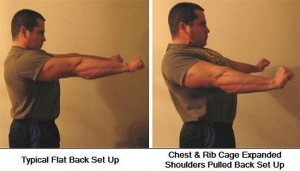 If you require that lifters only have a small portion of the butt on the pad, this allows some very flexible lifters to achieve an extreme arch in their lower back and hips.  Under the current rules this style of lifting is legal, but I would ask why is this the case?  To be clear, there are two main types of arch that people use in their setup for the bench press.  The first is an arch in the upper back in which the lifter raises the chest, pulls the shoulder blades back, and drives their upper back into the bench press.  This slightly shortens the ROM (range of motion), puts the pushing muscles in a position to generate more power, and increases upper body stability (see figure 1).  Almost everyone agrees you should do this when you bench with heavy weights.  The second kind of arch is where you attempt to tilt your hips excessively forward so that the top of your pelvis is almost pointing directly upward toward the ceiling (instead of pointing toward the bar on the bench press).  Then the lifter lies back and tries to have their belly button and stomach be as high as possible while still having their shoulder blades securely on the bench.  It is in this second type of arch – which I refer to as an extreme arch – where the arch is generated as much from the hips as the upper back.  This is the type of arch I take issue with.

If a lifter can do this, this greatly reduces the ROM and thus the work done to complete the bench press.  And if you don’t think the original rule makers cared about lifters reducing the ROM excessively to the point of almost changing the lift to something else, why did they implement a maximum grip width rule?  This is why you have to have at least finger on the ring of the bar, going wider than that is illegal.  This is another reason why belly benching is illegal.  I believe the original founders of powerlifting had an idea of what the lifts should look like and they wanted to set up rules to try to standardize the movement.  They did a pretty darn good job of it but it is okay to tweak and modify rules as time progresses.  When a lay person sees a lifter bench with an extreme arch, almost unanimously they ask – “isn’t that cheating?”  Currently the answer is no – because cheating is defined as breaking the rules.  But the real question should be: Why is that allowed?

Pictures below are 4 examples of lifters with an arch that would be a legal lift under the suggested rule change:

Pictured below are 4 examples of lifters with an extreme arch.  These lifts would be illegal under the suggested rule change:

The purpose of powerlifting is test to maximal strength, not maximal flexibility.  One of the joys of powerlifting is that when properly performed powerlifting builds an impressive amount of muscle mass.  This is not true when you lift with an extreme arch.  Research is clear that the more a muscle is stretched on the eccentric portion, the more it responds to the exercise (one reason why a full squat is almost always better than a half squat, even if you can use more weight in the later).  Using an extreme arch greatly reduces the range of motion and thus the effective stimulus on the muscle.  A second joy of powerlifting is that developing proficiency in the powerlifts is very likely to improve athletic performance on the field, court, or the mat.  This is true when one performs the powerlifts as they were originally intended.  There is no evidence to support that benching with an extreme arch would help an athlete play football better, or improve their shot put, or even get them much better a push-ups.  Indeed the principle of specificity would suggest that training regularly with an extreme arch would have minimal to no positive effect on those abilities.

That is the not the direction powerlifting should be headed in.  Powerlifting is currently experiencing a surge in popularity.  I believe this can be attributed to 3 key areas.  It is due in part to the return of raw lifting; it is also due in part because almost all athletes are now realizing that getting stronger will help them in their chosen sport; and it is due in part due to the increasing popularity of CrossFit.  All of these things are good from a powerlifting point of view.  When athletes accept that being strong will help their performance, the next logical question to ask is “how do I become strong?”  They will then turn to those athletes that are already strong and seek to learn from us.

Some powerlifters mock CrossFitters and obviously CrossFit as a whole has some flaws; but in my mind anything that is exposing large number of people to squats, deadlifts, presses, lifting weights, and just training hard in general – that is a good thing.  And when those CrossFitters want to learn how to pull 5 plates or smash some reps when squatting 315, who will they turn to?  Once again, us – the powerlifters.  I have had many CrossFitters contact me for that exact reason.  They have their conditioning down, they can do burpees and even handstand push-ups, but they just aren’t strong enough.  When you can only deadlift 275 and the WOD calls for repping out 225, that is going to be a challenge.  But when you can deadlift 405 without breaking a sweat, now repping out 225 is a joke – you hit your 21 reps in 1 set and move on.

My point is that performing the powerlifts with their classical form – below parallel squats, full range deads, and paused benches with a reasonable range of motion – those lifts are beautiful to behold and have tremendous positive impacts on one’s physique and one’s performance.  Certainly, individual variation dictates that not all lifters will have the exact same form, or the exact same range of motion, on every lift.  I am not arguing they should, and indeed the sport itself balances things out well.  As an example short arms are great for a bench press but they suck for deads.  But don’t resist change just because “this is the way it is now.”  Look to the future and think about how you want things to be.  When you bring family and friends to a meet, do you want to go through a 10 minute explanation of how an extreme arch is technically legal because it is within the rules (which almost always makes the newbie think less of our sport even after that discussion)?  Do you want to see high school weight training teachers teach kids to bench with an extreme arch because that is how they saw someone on youtube do it?  Or do you want to see the more classic bench press – chest up, shoulders back, upper back arched, butt flat on the bench, feet flat on the ground, body locked in tight.  That to me is beautiful.  That to me is strength.  That to me is inspiring.

That to me is powerlifting.

10 thoughts on “It is Time to Change the Rules”